This guest post was written by my longtime friend Galit, who recently decided to leave the country she grew up in. Read on to get to know her journey and see a photo of us back in elementary school.

I’m a baalat teshuvah, which means that I was born Jewish but lived a secular life, until recently.

Growing up in Antwerp as the daughter of a Jewish mother and a Muslim-born Senegalese father, I was aware of being Jewish. My mother took me to her side of the family for holidays, she taught me Hebrew songs, and we went to the synagogue once in a while. But I was more aware that my skin tone was brown. Other children made sure I knew. They made racist remarks and teased me. 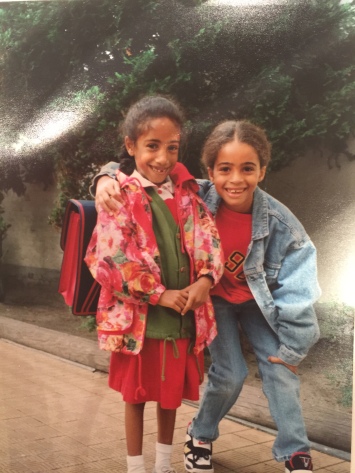 Around the age of 27, while I was living in a Belgian city devoid of Jews, I suddenly had an urge to become the Jew there. It wasn’t like Antwerp, where you saw ultra-orthodox Jews walking around in certain neighborhoods. I couldn’t even go to a synagogue if I felt the need to. I felt like I had to try to be the right example of what a Jew was, by observing the mitzvoth. I had tried living a religious life in the past, but didn’t know how, and failed. This time, I told myself to take it slow, since it’s a long process and there’s so much to learn.

I threw away my leggings and started buying skirts that reached below the knee, wore shirts that didn’t show my collarbone nor my elbows, started praying in my Siddur, and watched Torah classes online.

Working at a bank, where the custom was to shake everybody’s hand in the morning, was tough. Being an observant Jew also meant only touching people of the same gender, very close relatives, one’s spouse and children. Obviously, if a man is about to fall I may help him, since saving lives trumps all in Judaism.

After a while, I decided to go to a seminary in Jerusalem, to deepen my understanding and knowledge of Torah, and to really start living an observant lifestyle. I luckily have Haredi family members and friends in Israel to stay with during Shabbat and holidays or in case I need advice. I ask them about which laws to observe during specific Jewish Holidays, dating and marriage, living in Israel, and more.

I feel more at home here than I ever did in Flanders, where at times people would assume that I didn’t speak Dutch and instead addressed me in French because of the color of my skin.

Recently, I have made Aliya. Partly because I don’t receive racist remarks in Israel. People automatically assume that I’m Jewish and that I must speak Hebrew. I feel more at home here than I ever did in Flanders, where at times people would assume that I didn’t speak Dutch and instead addressed me in French because of the color of my skin. They often asked my mother if I spoke Dutch, while I was standing right there next to her. Yes, it’s truly a crazy idea to able to speak more than one language.

Here in Israel, there’s a sense of belonging and I truly feel at home. I enjoy walking around the Old City of Jerusalem, stopping by the Kotel to pray, and taking trips to explore places I haven’t been yet. In my community, people invite each other over for Shabbat and holidays, and we’re basically a big family. For the first time in my life, I feel strongly connected to the history of my people. I am not planning on ever moving back.

About the author: Galit was born in Antwerp to a Jewish-Belgian mother and Muslim-born Senegalese father. She currently lives in Jerusalem.

Want to write a guest post for Two or More? Let me know!